Do you think fears about geotagged photographs are overblown?

Well, maybe a tweet made today by my friend, Professor Alan Woodward of the University of Surrey, will change your opinion.

Geotagging is where a photograph has invisibly embedded inside it information about where in the world the photograph was taken.

By “where in the world,” I don’t mean the country, or even the city. I mean, the precise GPS co-ordinates of where your iPhone or iPad was when the photograph was snapped.

The information is stored inside a photo as Exif data, alongside all sorts of other details collected about the picture you have taken—including the make and model of your camera, its shutter speed, whether you used a flash, and the date and time.

Now, you may think that only political dissidents and whistleblowing journalists have anything to worry about when it comes to their location being revealed by a photograph published online. But think again.

In the example Alan shares above, it’s clear that tourists on safari in South Africa could put endangered species like the rhino at risk by snapping away.

And then there is always the risk of an abusive ex-husband or jealous partner tracking you down if you have been careless enough to reveal your whereabouts unwittingly in a photograph posted online.

In late 2012, when anti-virus veteran John McAfee was on the run from the Guatemalan authorities, he suffered from a photo meta-data screw-up after Vice magazine published a photo when they interviewed him at a “secret location.” 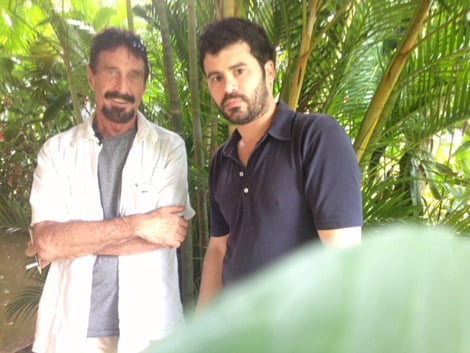 I can only imagine McAfee’s response when it was discovered that the photo’s Exif information revealed the eccentric fugitive’s location.

The problem is, of course, compounded by the fact that you may have hundreds of different apps on your iPhone and iPad.

You’re not sure which apps are grabbing your location, and which ones aren’t. You may even have umpteen different camera apps, all with different features and (potentially) different intentions of what to do with your location information.

On your iPhone or iPad, go to:

Then, next when you launch—say—your camera app, make sure to choose “Don’t allow” when asked if you want the app to be able to access your information. If you don’t allow the camera access to your location in the first place, it can’t sneakily share it with others.

You can also review the location-accessing rights of specific apps at any time by accessing:

By the way, don’t think GPS and location services are all bad. On your iPhone, it’s the technology behind the “Find my iPhone” service which can help you track lost and stolen devices.

And, even rhinos are helping fight the threat of poachers with a little help from GPS tracking.

For more tips on how to better protect yourself and your iPhone, check out our Top 9 iPhone Security Tips.

Graham Cluley is an award-winning security blogger, researcher and public speaker. He has been working in the computer security industry since the early 1990s, having been employed by companies such as Sophos, McAfee and Dr Solomon's. He has given talks about computer security for some of the world's largest companies, worked with law enforcement agencies on investigations into hacking groups, and regularly appears on TV and radio explaining computer security threats. Graham Cluley was inducted into the InfoSecurity Europe Hall of Fame in 2011, and was given an honorary mention in the "10 Greatest Britons in IT History" for his contribution as a leading authority in internet security. Follow him on Twitter at @gcluley. View all posts by Graham Cluley →